Probably the most used tube of all times in the final amplifier of "boat anchor" transmitters is the 6146. From the early 1950s until at least the 1980s, the 6146 found its way into virtually every manufacturer's line of transmitters. In fact, during the early 1960s RCA had a series of advertisements on the back cover of QST that listed a different manufacturer's equipment that used the 6146 each month. A copy of the January 1960 QST advertisement featuring the Hallicrafters HT-37 is included with this article. There are actually three distinctive variants of the basic 6146: The 6146, 6146A, and 6146B. It is unfortunate that the 6146B was called the 6146B for it is really a different tube from the first two. Primarily the difference between the "plain" 6146 and the 6146A is the makeup of the heater ("filament"). The 6146A has what RCA calls the "dark heater". This "dark heater" is supposed to be more resilient to vibration, work well at a larger "range" of voltage, etc. Otherwise, the 6146 and the 6146A are the same tube.

Many amateurs are aware that the military "ruggedized" version was designated the 6146W (I will get to these tubes a bit later). However, RCA also introduced in the early 1960s the 8298 tube for use in commercial mobile equipment. The 8298 is just a "heftier" 6146A. Motorola, General Electric, and quite a number of other commercial FM equipment manufacturers used these tubes in all sorts of FM communications equipment for both low band (30-50 MHz) and high band (150.8 - 172 MHz). When the 6146B was introduced, RCA "announced" the 8298A commercial equivalent of the 6146B. In fact, most of the RCA 6146B tubes were "cross branded" with the 8298A number in addition to the 6146B.

Those companies who were manufacturing 6146 series tubes for the military changed from the "plain" 6146 the "date code" which is printed on each tube. Different manufacturers changed tube types at different times. Also, I know of no "master list" telling on what date a particular manufacturer changed from the 6146 to the 6146A to the 6146B. The only "sure" way to know if a particular 6146W is of either the 6146 or 6146A type is to look for a "code date" of before 1964 since RCA introduced the 6146B in the middle of that year. However, some manufacturers did not start manufacturing 6146B equivalent 6146W tubes for at least a year after RCA introduced the 6146B.

RCA "claimed" that the 6146B was directly interchangeable with the earlier members of the 6146 family. Unfortunately, this did not hold true in most cases. Collins, Heath, and probably other companies, at first issued various documents saying that the use of the 6146B in their equipment was "fine". But, this soon proved otherwise!

For example, when the 6146B was used in the Collins 32S-1, 32S-2, 32S-3, 32S3A, KWM-2, and KWM-2A it was discovered that the components in the neutralization circuitry "burned up" in a very short amount of time. Thus, Collins had to retract the statement that it was "OK" to use the 6146B. Then, due to the fact that the United States military establishment wanted to "standardize" on the 6146W equivalent of the 6146B, the neutralization components had to be redesigned to allow the 6146B to be used. Fortunately, these changes did not affect the use of the earlier 6146 and 6146A in those transmitters manufactured to use the 6146B. All three types of tubes may be used without any problem in these transmitters.

Replacing the 6146 / 6146A tubes with 6146B types often results in spurious emissions, parasitic oscillations, etc. This is due to the fact that there are different bias requirements, different inter-electrode capacitances, etc. of the 6146B versus the other two. It is often difficult to neutralize 6146B tubes when used in place of the 6146 / 6146A. If neutralization can be achieved, often it lasts for just a few minutes before the tube(s) goes into oscillation.

There is another 6146 family tube that is "superior" for operation at least through 10 meters. That is the 6293. This tube was designed for "pulse" service and is rated at 1-Kilowatt pulse power input. The primary difference between these and the "normal" 6146 is that the plate is much "heavier" in its construction. Back in the late 1950s and early 1960s we would almost "kill" to get our hands on a pair of these for our DX-100s, etc. The 6293 outlasts the 6146 in "normal" service by at least 5 times and often more than 10 times the life of the tube. These tubes "show up" at hamfests, swap meets, etc., from time-to-time. If you see some of these, definitely "glomp" onto them!

At that time, the Motrac series of mobile equipment was very popular. Depending on the model, these normally used one, or two, of the 6883A / 8032 tubes. It was only in the very "latest" models (HHT "E" series, LHT series, and MHT series) that Motorola had redesigned the equipment to use the 6883B / 8032A / 8552 tubes. Around late 1976 or early 1977, Motorola decided to eliminate some of the tube types that they were "stocking" at the Schamburg, Illinois, parts depot. Thus, they started shipping 8552 tubes in boxes that were marked as 8032. The Motrac is unique in the fact that you cannot see the tubes when they are in operation (they are enclosed in a metal "heat sink"). In fact, it is difficult to even "tune" a Motrac when the heat sink is not in place.

We went through from 50 to over 100 of the 8032 type tubes per week and within days were "down" to using the 8552 tubes in the 8032 boxes. Within a very few days of starting to use the 8552 tubes we started receiving complaints that virtually every Motrac unit that was received by customers arrived with one, or both, tubes broken. Prior to this we had never had a single complaint. Upon investigation we found that the 8552 tubes had so many parasitic oscillations that they were getting so hot that the glass envelope was being annealed! This was happening within a minute, or two, of tune-up and final quality control. When the radio was subjected to normal vibrations of shipping, the glass envelope of the tubes was being shattered.

This was reported to Motorola. At first they refused to believe us saying that we must have gotten a "bad" shipment of tubes. But, within a couple of weeks they received over 1000 complaints from their service stations about exactly the same problem. It cost Motorola one "heck of a lot" of money to pay the warranty claims because they had tried to "cut costs" by eliminating the earlier type of tube. They had to re-box all of the 8552 tubes that had been put into 8032 boxes and get in a "rush" shipment of 8032 tubes.

The whole problem stemmed from the fact that the "B" series of tubes is not the same as the "plain" and "A" series. The parasitic oscillations were caused by the different bias requirements and by the "fixed" neutralization of the driver and/or amplifier tube in the Motrac. There was no practical way to change the circuitry to handle the "B" series tubes. Also, making such a change would void the "type acceptance" of the units.

Also, in a number of transmitters and transceivers (especially the Heath SB-Line) the heaters ("filaments") of the pair of 6146 tubes are in series. In these units it is very easy to change the heaters from series to parallel and substitute the 6883 / 6883A / 8032 tubes. The 12-volt equivalent tubes are often available for "pennies" because of the vast number that were used in the commercial FM market. I have done this with my Heath SB-110A and it works "like a champ". If you every want to change back, it is a very simple operation to do so.

I know that there are amateurs who say that they have used the 6146B tubes in place of the 6146 / 6146A without any problems. I can definitely believe that. But, I have seen way too many examples of the 6146B causing problems in relation to the cases in which the substitution has no effect. As I said before, neutralize and keep checking the neutralization for several days if you do replace your 6146 / 6146A tubes with 6146B types. Otherwise, you can find yourself with TVI, "burned out tubes", and other damage to your transmitter.

You must be VERY careful when dealing with the various tubes of the 6146 family, otherwise you just might be in for some very interesting problems. Substitute if you must, but, be aware that you are "treading on thin ice". 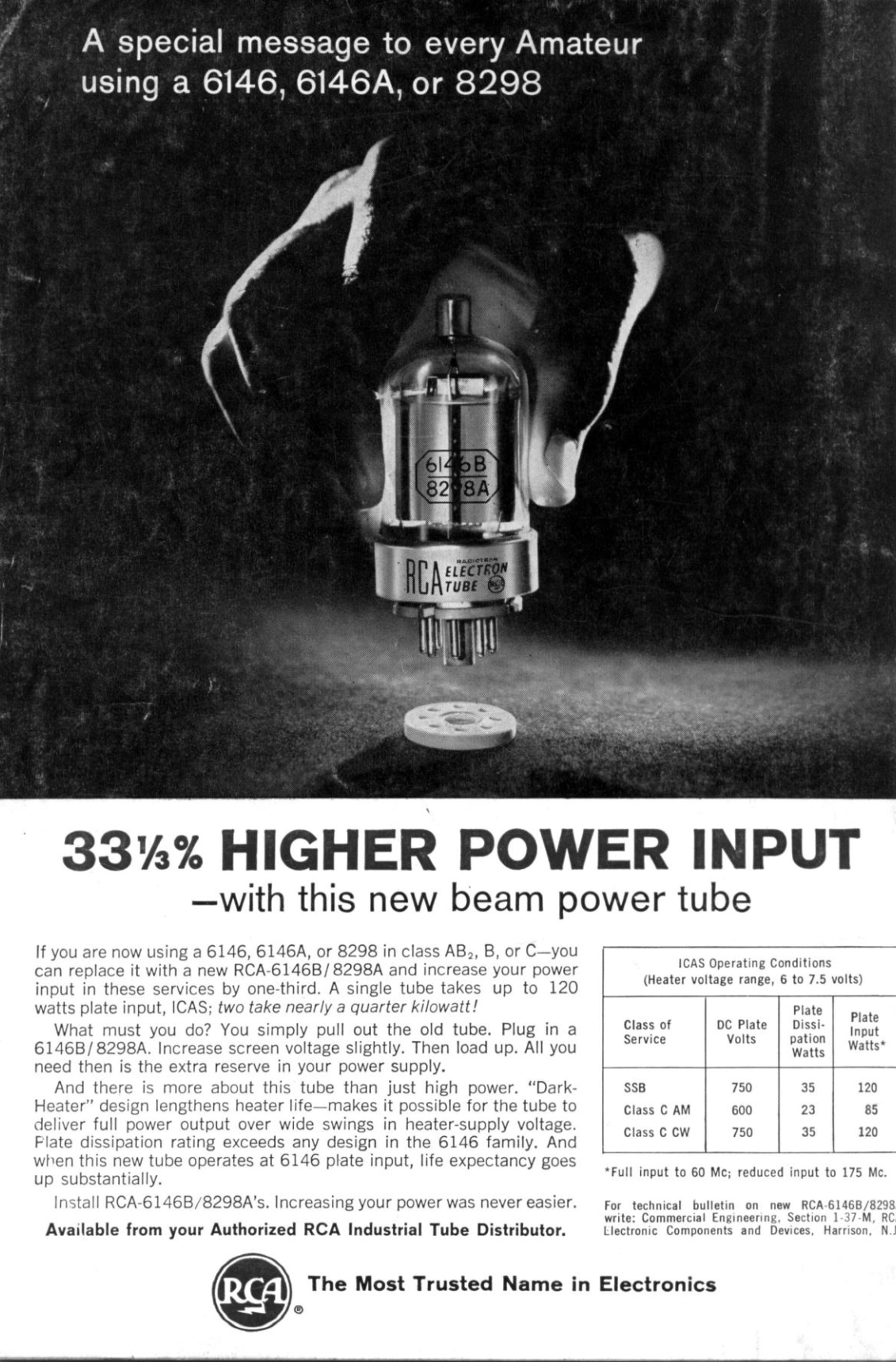 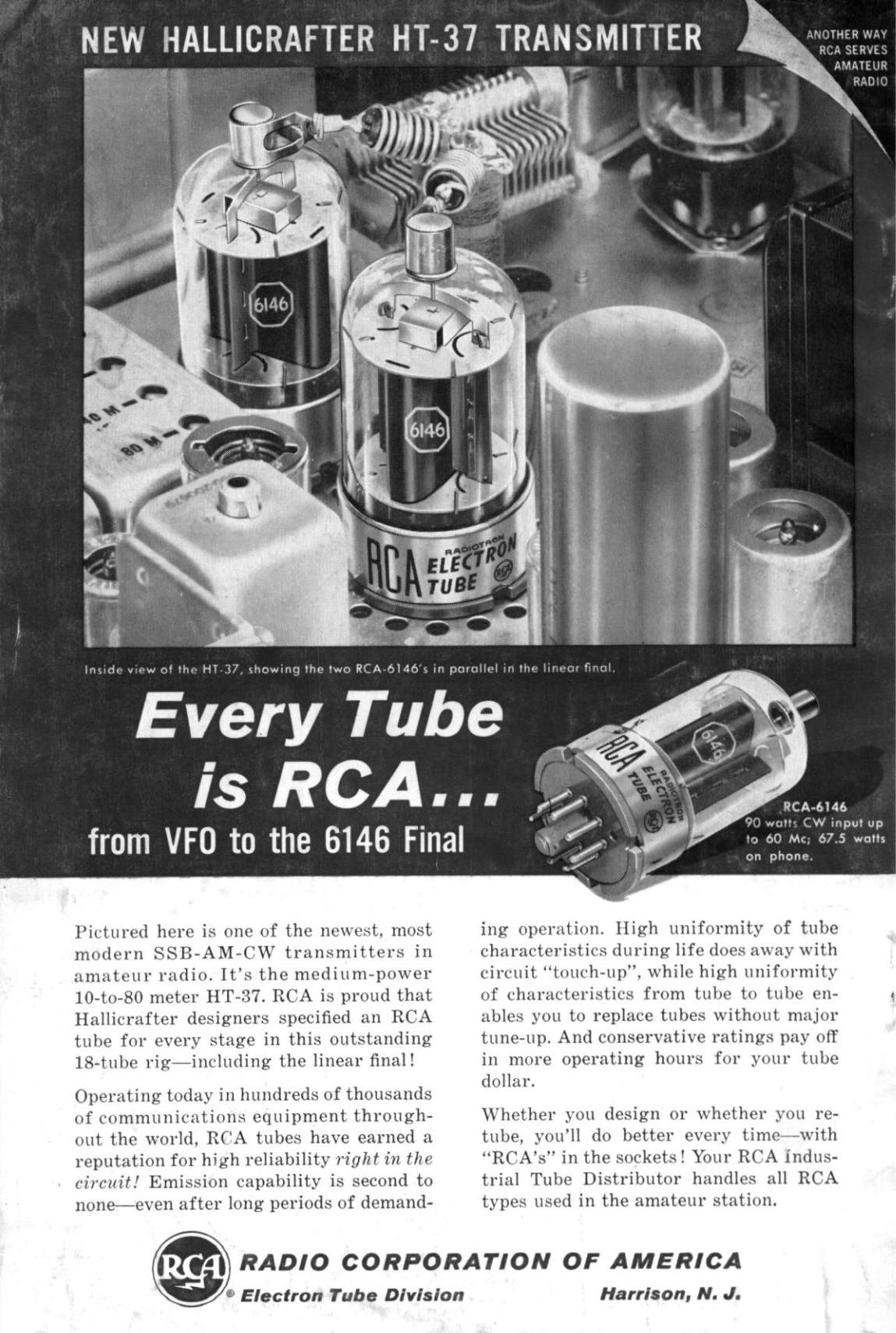