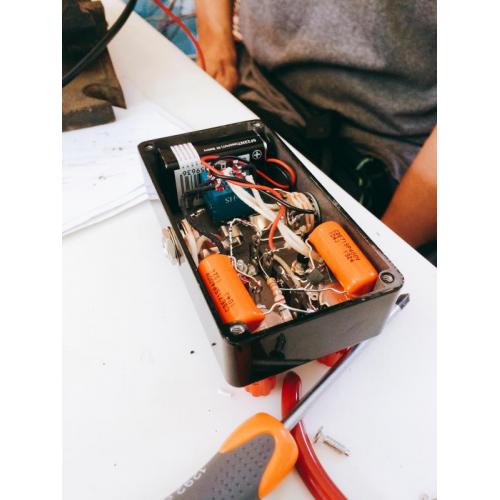 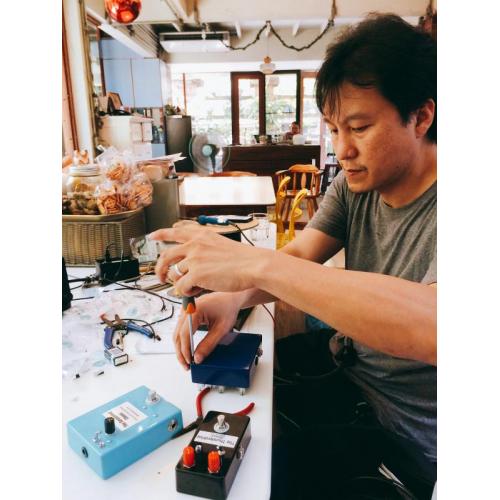 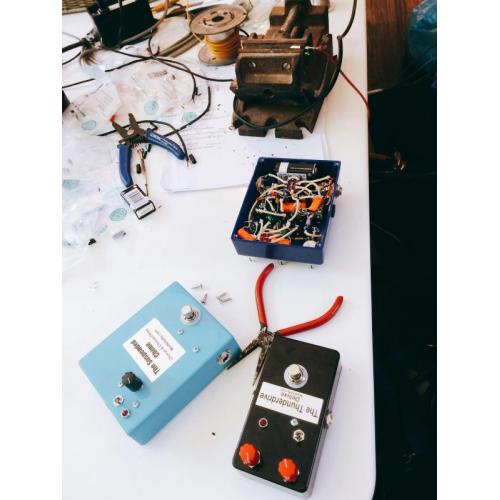 Adjusting volume control and gain controls provides a wide variety of tones in spite of its simple construction. The Turbo switch provides an additional boost in volume and less internally generated distortion. It is capable of overdriving the preamp section of your guitar amp or adding its own layer of distortion at lower volume. The current draw of this pedal is very low at 1.3 milliamps, allowing for long battery life.

Now Playing: Sound Sample
Sound Sample01:03https://www.amplifiedparts.com/sites/default/files/associated_files/thunderdrive_deluxe_sound_sample.mp3
Update Required To play the media you will need to either update your browser to a recent version or update your Flash plugin.

Click each question to see its answers.
1 answers I'm a bit of a noob - is there a way to mod this to have a power jack (for use with a One Spot) instead of a battery?
Asked by Anonymous on November 25th, 2016.
Matt H
Hi, please visit the FAQ section on the MOD Kits DIY website. (https://www.modkitsdiy.com/). There you will find documentation on this mod. Also, we have a battery snap that works with the Power All System. Search for SKU: M-PAS-CABLE-6.
Answer this question
Have a question of your own? Ask us now!
Terms and Conditions
Add a review

The pedal definitely works and even sounds pretty good. There are just a few things that would have made the build easier. First off, the pedal wasn't completely pre drilled. There was a starter hole for the foot switch but I had to finish drilling the 1/2" hole for the switch.

The directions are pretty clear for the most part, but some things should definitely be changed to make the build easier. First off, I would only mount the terminal strip and led first. When you add in all the other parts such as pots, and input/output jacks, it makes it much harder to work in and those parts aren't necessary till later. Mounting most of the components to the terminal without soldering them is a pain in the ass. I ended up looking at diagram 4 and starting with lug 1, I started soldering the components that way. I know it's not the best way to do it but there's got to be a better way. Also, I highly recommend that after you mount the terminal strip and led, add in the foot switch and connect the negative wire from the led to lug 4 on the foot switch before adding anything else. Once the input jack, battery terminal and other wires are added, it makes it much more difficult to wire that part of the led.

The pots and toggle switch all came with extra nuts and washers. The instructions weren't clear about weather or not to use them so I only used one set instead of 2. I'm not sure if they were thrown in by accident or what, but I wish the instructions would account for these in some way. Maybe a note that says, the parts come with extras, just use one set.

Other than that, the enclosure was scuffed up when I got it. Normally that's not a big deal but I built this pedal as a gift for someone. I'm also going to have to print out labels for the volume and gain pots since none came with the kit. Over all, it's a fairly easy build and it's a good little distortion pedal. If this is a first build, then I would recommend getting it.

I actually bought this kit some months ago, but I've only just got round to putting it together. I've built a few byoc and FuzzDog kits, and I've re-wired guitars in the past, but this was my first attempt at building a pedal using point-to-point construction, and I think it was a great place to start. It's a pretty simple circuit (3 resistors, 2 caps, a couple of diodes and a tranny) but the components are high quality and the results are very professional. The instructions were very clear and well thought-out, and they came printed out with the kit, which was nice; generally you have to download a pdf file. The diagrams in particular were very helpful - they were printed in black and white, but I'm not sure colour would have added much(?) A few minor points (...that may or may not be useful for others...): 1. I found it easier to attach as many components as possible to the terminal strip *before* installing it into the enclosure 2. The instructions say "Be careful not to overheat solid state devices (diodes and transistor) when soldering"; I recommend using a croc clip as a heat sink to avoid frying them 3. Using medium grade sandpaper to rough up the lugs on the jack sockets seems to help them "take" solder better, but YMMV and all that... All in all, I highly recommended this kit; I'm thinking about doing the reverb next!

I think this kit (my first attempt) is very well designed and has a great vintage feel to it. My only problem is me! I took my time, but it so far the red LED lights up when I switch it on but all it does is dead silence... is it possible to put in resisters backwards?? If so - I think that is what I messed up on. Any way- I WILL get this working! Then I'm buying a tube amp from these guys - cause these kits are certainly fun to build - and I think I can only get better!!

Fun n easy construction. Because of these pedals I am now obsessed with learning more about building pedals and amps. It has a good tone but instead of a full on raunchy distortion, it has a nice smoothe warm sound. I am very pleased.