Click to zoom in
Customer Images:
No Images yet! Submit a product image below!

The Data Corrupter is a monophonic analog harmonizing PLL with modulation. It takes your input signal and brutally amplifies it into a crushing square wave fuzz tone that is then multiplied, divided and modulated to create a wild, yet repeatable, three-voice guitar synthesizer.

The Master Oscillator is the central nervous system at the heart of the Data Corrupter’s cyberpunk hive mind. It feeds your input to the signal harvester in its original octave (Unison), one octave down (-1) or two octaves down (-2) for maximum compatibility with your preferred instrument and frequency register. Once you’ve chosen your input octave, then the Data Corrupter will perform its calculations and spit out an analog synthesized frequency, which can be pitch-bent for portamento or vibrato sounds by the Frequency Modulator! From there, you can blend in one of eight Subharmonic intervals up to three octaves below the input and mix in a square wave fuzz tone for maximum data corruption.

Warning: this product can only be shipped within the United States. 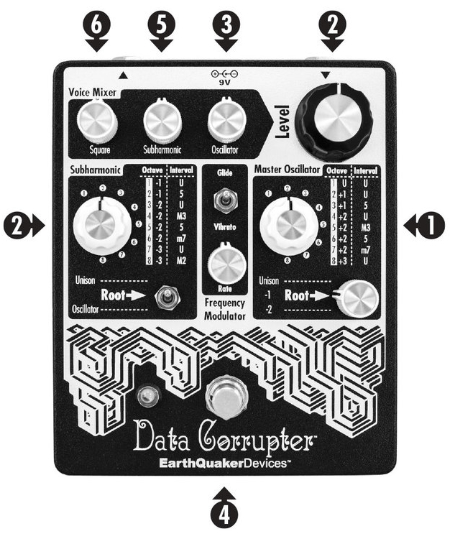 The Frequency Modulator (4) applies pitch-bend modulation to the Master Oscillator. In Glide mode, you’ll hear a smooth portamento as each note slides into the next. In Vibrato mode the pitch modulates up and down for a retro sci-fi laser effect.

To unleash the cracked machine lurking within the mainframe, set the Subharmonic Root Switch to Oscillator and try not to look away as the sonic malware you just installed mangles your input signal into the sum and difference of both the Master Oscillator and Subharmonic with the Frequency Modulator applied to the upper and lower octaves.

If you think you’re brave enough, set the Subharmonic Root Switch to Oscillator and try experimenting with different Master Oscillator and Subharmonic programs to wind up the doomsday clock and inch ever closer to the Singularity. Adjust the Voice Mixer’s Subharmonic Control to set the lower octave volume.

Finally, (or is it?) the Square (6) control located top-left on the Voice Mixer blends in a fuzzed-out square-wave take of your input in its original octave. That’s it. These aren’t the droids we’re looking for. Move along.

The heart of this pedal is based around a CMOS Phase Locked Loop (PLL) IC. In a nutshell, the PLL takes your input signal and compares its phase and frequency against an oscillator, generates an output proportional to their difference then feeds it back to the oscillator. This then causes the oscillator to lock onto the input signal and generate a synthesized frequency. Pretty cool, right? This synthesized frequency is referred to as the Master Oscillator on the Data Corrupter.

This device takes its inspiration from the Electrax Synthax and the “Basic Frequency Synthesizer” by Ray Marston. Neither of these were really intended to be guitar effect pedals and a lot of work went into creating the Data Corrupter to provide excellent tracking and long sustain. We think you’ll find it more expressive and accurate than pretty much any other PLL based effect pedal around. 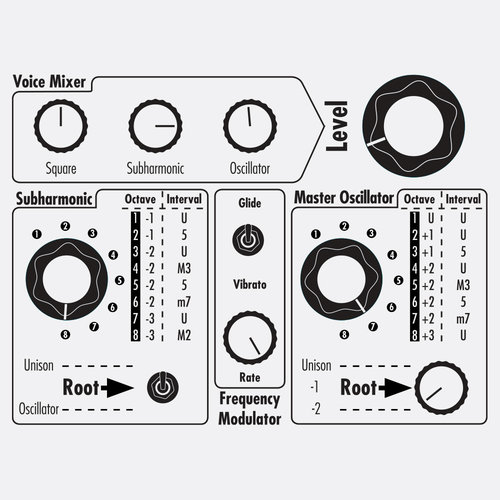 Equinox: Play esoteric and epic melodies, hair-tossing bends, and sassy pull-offs above the 12th fret. Raise your fist as the crimson smoke fills the stage. 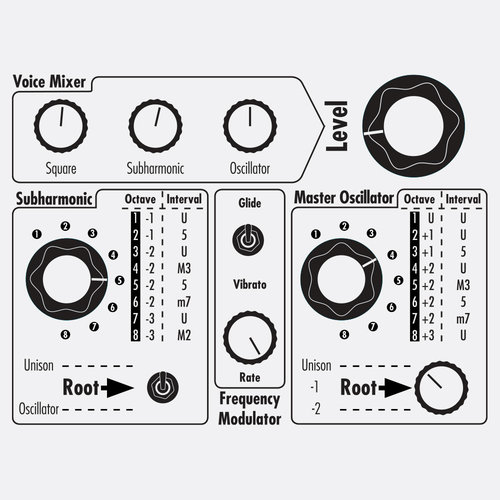 No questions have been asked about this product.
Have a question of your own? Ask us now!
Terms and Conditions
Add a review

No product reviews yet! Be the first!