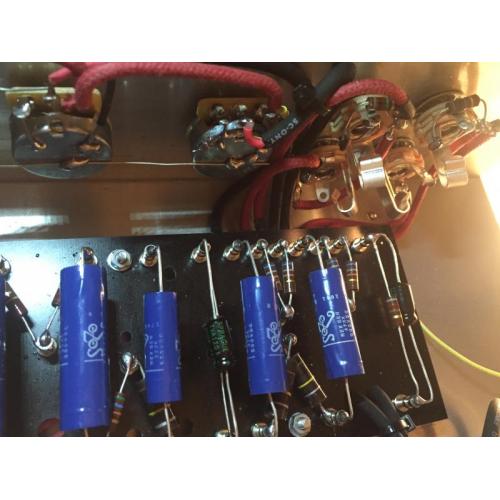 Starting at: $4.95
Product Optionsare currently out of stock and will be placed on backorder.

The BlueMolded line of polyester film capacitors are retrofits for Astron or Blue Molded caps used in vintage tweed, brown, and blackface Fenders®. These capacitors amazingly capture vintage Fender® tones of the Blackface era, and the famous 1959 tweed 5F6-A Bassman era which is so musical and good, Marshall™ modeled their amps after them!

After years of painstaking research and development, in 2003 SoZo Amplification began manufacturing the SoZo Mustard Cap™ capacitors, which quickly caught on among discriminating musicians and amp designers. Now, hundreds of thousands of capacitors later, SoZo has engineered capacitor product lines optimized for different products, including amps by Marshall™, Fender®, Vox®, HiWatt, and others, as well as professional sound gear from Neve, API, Neumann, Universal Audio, Urei, and virtually any quality gear from the 1950s on.

These caps are successful recreations of the originals and are superbly built and excellent-sounding caps. When one considers the audio signal passes through as many as ten capacitors before exiting the amplifier, you can see how these components play an extremely large role in the tone of the amplifier.

Click each question to see its answers.
2 answers Nice write up but is there any technical data on the construction? What makes these different?Are they more linear, longer life, less, leaky, lower ESR ?lower noise?
Asked by Anonymous on June 21st, 2017.
Matt H
For more information on these caps please go to the Sozo site: http://www.sozocapacitors.com/capacitors/
Anonymous
In response to the question “what makes these different/better..” Frankly, it’s not very scientific.. The main selling point on these is the closeness of these to the vintage “genuine” caps of the same name. They also look like the just like old Astron & Blues they’re based on. So theres an appeal or nostalgia for vintage Fender amp owners or those who wish to recreate them. Unfortunately Sozo doesn’t publish or make public data concerning manufacturing.. Nor do they give specifics related to voltage drop, pulse, dielectric in temp, or other performance data derived from testing like other manufacturers do. That being said they sound fantastic so if you can afford to it may be worth trying them..
Answer this question
2 answers Can you put together a kit for my 67' DLX Reverb...I want to replace the molded blue caps and tube grid resistors
Asked by Anonymous on June 21st, 2017.
Matt H
Unfortunately we do not have a kit at this time. You will need to put a parts list together from a schematic of your amp.
Anonymous
Technical data for caps does not always tell the end result whole story when tone is what we want. I've been using these Sozos for about 10 years in harmonica based builds. The low end dynamics tighten up significantly with nice fat attack....no flab. I recently modded a friends useless ringy n screechy very very RARE Pignose G60VR single 12" combo and replaced every cap, except the power filter section, with Blue Molded .047s in the preamp section and one yellow. 023 in the treble and a silver mica, and .1uFs Blues in the output section...changed all the tubes too. I also rewired the spaghetti plate so wires aren't creating inductance interference. Put a Weber12A125-0 and dialed back the output some. What a freaking tone monster that 30lb amp is now. Big fat punchy lows with smooth highs.
Answer this question
1 answers Is the line marking the foil end on the sozo blue caps?
Asked by Anonymous on November 9th, 2018.
BradWbr

Staff Member
Yes, that is the significance of the silver line.
Answer this question
1 answers Will this replace the blue molded Packard-Bell .022 mfd 600 volt foil caps?
Asked by Anonymous on November 28th, 2018.
BradWbr

Staff Member
The voltage is lower, but if your application can safely run 500V caps, yes, these can be acceptable replacements.
Answer this question
Have a question of your own? Ask us now!
Terms and Conditions
Add a review

This SoZo NEXGEN BLUE .022uf capacitor will give a Humbucker pickup a good "vintage" tone like an Audiophile Boutique Tone Cap should. Nice low price to.

I've been using Sozo caps in all my personal builds and harp mods for others since about 2004. And recently a very good blues harp player buddy of mine asked me to swap out all the original Yellow Astron tone caps in his REAL 59' Bassman...and I said whomwever put those OD's in the 1st stage they're coming out. So I used 3 Yellow Next Gen Sozo and 5 Blue Molded Sozos and he said, "Man I've had this amp for over 30 years and it's never sounded this good." They just pass the low end with a rich dynamic tone and still retain the punch when a lot of other caps get flat or get too bright. For harp I won't use any other cap.

I use SOZO Blue in all my Marshall style builds. They are simply the best sounding for coupling caps.